Hotel
Author
관리자
Date
2016-04-08 11:59
Views
2195
Rivett family sets 1,000-hotel goal for My Place brand
07 APRIL 2016 9:06 AM
With a long history in the economy hotel space as part of the original Super 8 launch, the Rivett Group has expanded into the extended-stay segment with the growth of the My Place Hotels of America brand. 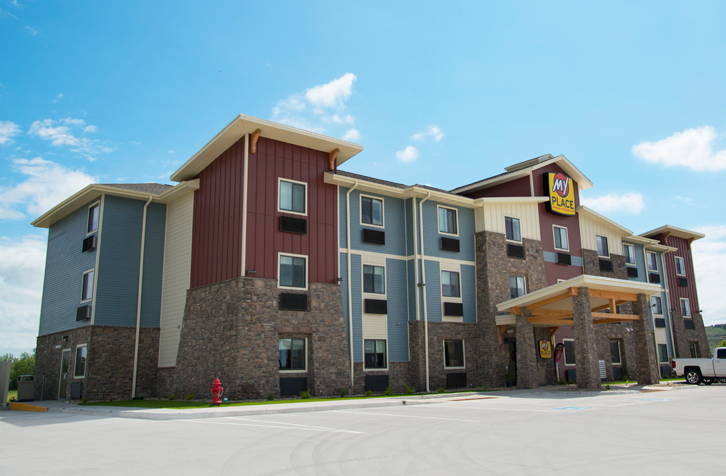 The My Place Hotel in Fort Pierre, South Dakota, is one of 22 properties the brand operates in nine states. (Photo: My Place Hotels of America)
By  Jeff Higley
jhigley@hotelnewsnow.com
@jeffhigley1

ATLANTA—The hotel business runs through Ryan Rivett’s family tree, and at the urging of his grandfather he is branching out to nurture an upstart extended-stay brand called My Place Hotels of America.

Rivett, the co-founder, president and COO of the economy chain, is thinking big. With 22 properties open, his sights are set on a large platform for My Place.

“With technology, capitalization and the fact that we’re starting from the position of knowing what we’re doing, in 10 years we expect to be at the 1,000-property mark,” Rivett said during a break at the recent Hunter Hotel Investment Conference. “We understand what it takes to run a brand of that size and scale, and there’s no cap on how far we can grow it.”

The Rivett family is no stranger to big brands. Ron, Ryan’s grandfather and co-founder of the My Place brand, co-founded Super 8 Motels in Aberdeen, South Dakota, in 1974. He helped build it into a powerhouse brand with more than 1,100 properties before selling it to Henry Silverman’s Hospitality Franchise Systems (now Wyndham Worldwide Corporation) in 1993.

Ryan Rivett, Ron’s oldest grandchild, said it’s that background that will help entrench the My Place brand in a sweet spot in the hotel industry.

“My family operated the Super 8 brand in a very vertically integrated way,” Rivett said. “Even after we sold it to HFS in 1993, we continued to operate it that way. The vertical integration into the business led us to primarily serving our own activities.”

Those activities include a supplier side of the business to stock its own properties as well as those owned by others. But it’s the hotel franchising model that has grabbed the younger Rivett’s interest—at the not-so subtle urging of his grandfather, who told him the idea for My Place and that he was the man to execute it after working in every department of the family business and building 150 apartment units in Aberdeen.

Perhaps it was the footage of young Ryan singing karaoke at a Super 8 convention in 1992 or, more likely, the notion of maintaining the Rivett Group’s focus that spurred him, but he quickly jumped on board.

“It was really an opportunity I couldn’t refuse,” he said.

The concept evolves around having all new-build properties. The 64-unit prototype is a manageable size and is fills a big void in the industry, according to Rivett.

“The timing is relevant because everyone is talking about segment disruptors, and we’re doing that by being a midscale product at an economy price,” Rivett said. “That does disrupt things a bit. There’s a big space between the aging economy hotels and the new limited-service product in the market. The opportunity it has created is that we are in a space of our own.”

The niche for My Place is in the $75 to $90 range for average daily rate, according to Rivett.

“What you find today is the economy properties and some lower midscale properties are running in $50 to $75 ADR range and upper midscale is in the $90 to $110 range,” Rivett said. “That leaves a pretty substantial gap that is not well served by new properties today. If you want to position yourself in that space you’re generally a repositioned property. Now there’s another option.”

The brand is not geographically focused—since launching in 2012, it has opened hotels in places such as Omaha, Nebraska; Spokane, Washington; Bend, Oregon; Bismarck, North Dakota; Beaver Valley, Pennsylvania; and Anchorage, Alaska. It has hotels under construction in Lithia Springs, Georgia; Amarillo, Texas; Lubbock, Texas; Council Bluffs, Iowa; and West Valley City, Utah, among other markets.

The Rivett Group’s business model for the brand is entirely focused in franchising. It owns none of the 22 open hotels, although the grandfather and grandson have each personally invested in a number of the properties, Rivett said.

“That number has remained largely unchanged since we started in 2012,” Rivett said. “But there have been extreme variations in land cost.”

Operationally, the company works with a third-party vendor to provide a cloud-based central reservations system. It also is in the process of launching a loyalty program, Rivett said.

Rivett said he knows the vision for the brand is big and it will be a chore to reach the goal of 1,000 hotels in the system, but he’s banking on family know-how and a network of business associates that dates 40 years to help achieve the target.

“I had a unique opportunity to pay attention as I grew up, understand the business, our organization and the relationships that were built,” Rivett said. “It’s like an extended family.”

The lessons learned by his grandfather and his three daughters have filtered down to the third generation of the Rivett clan.

“Knowing economy hotels of days past … my family and the organization has a great understanding of that and the pitfalls we’ve been able to avoid because of that has been substantial,” Rivett said. “The design of the property is simple: We modified what worked in economy hotels to fit today’s consumer and franchise client world. We ended up with an extended-stay hotel.”

Rivett also knows he’s following in some pretty big footsteps, and there’s some pressure to deliver.

“There’s certainly pressure to perform in terms of expectations of employees, franchisees and investment partners,” Rivett said. “Going back to the personal element, there are expectations but those are met equally with skepticism. That skepticism externally puts more pressure on me than anything internal. That really fuels the fire.”